Crayon and marker on paper

During January and February the George Adams Gallery, New York will present an exhibition of paintings and drawings by Peter Saul at CB1-G in Los Angeles. The exhibition will feature 20 works made between 1957 and 1967 covering his development as an artist from the late 1950s through his transition from Pop in the early 1960’s to a politically engaged, topical artist whose works tackled the most pressing issues of the day in the later half of the decade.

Having spent most of the early 1960’s working in Paris, Saul claimed to have been largely unaware of the Pop Art movement, unfamiliar with the artists most typically associated with it. But critics reviewing his first exhibitions in New York and Chicago recognized him as a Pop artist though without the cool detachment preferred by most of Pop’s other practitioners.  As Ellen Johnson pointed wrote in her 1964 catalogue essay: “Where Lichtenstein appears to be amused and Warhol indifferent, Saul is angry…” And indeed he was – increasingly so.

Returning to the San Francisco Bay Area from Paris in late 1964, Saul’s work noticeably shifted to images of war, gradually displacing images from comics and the like. Soon his work was dominated by the war in Vietnam and topical social issues, such as civil rights. Increasingly Saul was dismissed by some critics as a ‘political’ artist, which only encouraged him, believing as he did that if what he was doing provoked the ‘tastemakers’ then he must be on the right track. As the artist wrote in 1967, “Now I think I have…paintings that could prohibit a sophisticated response. Not just because of ‘obscenity,’ which is prevalent, but because it is coupled with politics. I am polarizing things, want to see good and bad.”

The exhibition begins chronologically with a group of pastels, including a self-portrait. They were made in 1957, while Saul lived in Holland and demonstrate an early interest in distortion and the grotesque. In addition there are several paintings and drawings from the early 60’s dating to Saul’s time in Paris, including Ice Box #3 (1961), Gun Moll (1962), and Untitled (Superman) (1963). Examples of the later more political work include New China a large drawing from 1965, and the politically charged lithograph GI On a Cross and large canvas, I Torture Commy Virgins, both from 1967.

“Peter Saul: Pop to Politics” will be on view from January 7th through February 18th at CB1-G. Gallery hours are Tuesday through Saturday from 11 to 5, Sundays 12 to 4. 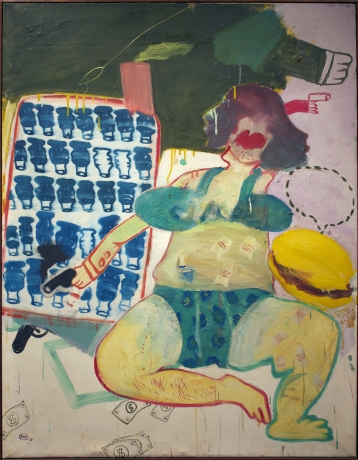 Peter Saul: from Pop to Politics reviewed in the LA Times

Peter Saul: Pop to Politics was reviewed in this weekend's LA Times, courtesy of Christopher Knight. His description of Saul's early paintings and drawings runs the gamut of art-historical references: "...Max Beckmann collides with jingoist all-American Thomas Hart Benton within an abstract structural armature of Willem de Kooning, all slathered with a cheeky overlay of Mad Magazine irreverence."