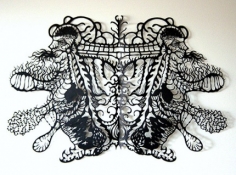 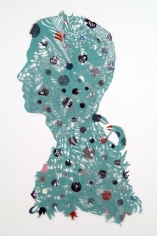 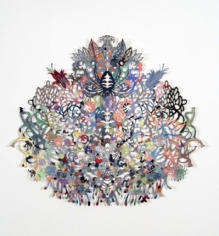 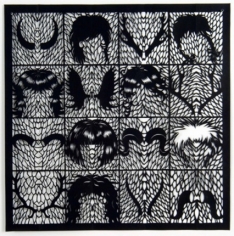 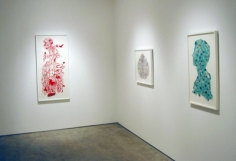 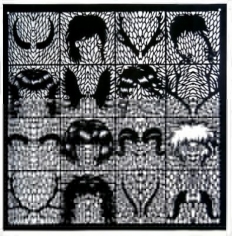 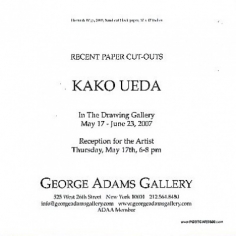 In the Drawing Gallery and concurrent with the Winters exhibition is an exhibition of recent lace-like paper cut-outs by KAKO UEDA. The exhibition, the artist's New York debut solo, will feature six works, all acrylic or watercolor on paper ranging in scale from 17 x 17 up to 50 x 28 inches.

Viewed in silhouette, Ueda's images combine figurative forms with those taken from nature, in what can be understood to be complex ruminations on life and death. In the blood red "Tree of Life," 2006, for example, a human skull appears at the top, a casket at the bottom. In between, among branches and drops of blood, appear a frog, a butterfly, a stag, a spider and web, human arms and legs, a caterpillar, a rabbit, the word "Arbol" (Spanish for tree) in reverse, among many others. In the even more elaborate, all black,"Allure,"2004-05, are images of  bees, ladybugs, dragonflies, beetles and more, while in "Vanitas," a watercolor on paper, one finds a barely perceptible skull among the densely rendered flora and fauna.

Originally from Tokyo, Japan, Ueda has lived in the United States since age 15.  She attended the joint BFA program at Tufts University and the School of Museum of Fine Arts.  In 1999, she was awarded an MFA from Pratt Institute.  Most recently Ueda's work was the focus of an exhibition at the Brooklyn Botanic Gardens, New York.  She currently resides in Brooklyn, New York.

Sandy Winters: In My Backyard and Kako Ueda: Recent Paper Cut-Outs will be on view through June 23, 2007.