In January and February the George Adams Gallery will show a selection of paintings by Jack Beal dating from 1968 to 1972, a four year stretch of time that was a fertile and searching  period for the artist.  During these years Beal relentlessly pursued an investigation of geometry and form, and this effort resulted in a group of hard edge paintings of still-lives and furniture, some including the figure.  While these paintings are vividly colored, large-scale, and imbued with other familiar Pop sensibilities, they somehow suggest an earnestness of purpose and are without any trace of irony.

Although this was a new approach for Beal, the concept and execution of these works can be directly traced back to the artist’s education in Chicago at the Art Institute.  His teacher and mentor, Isobel MacKinnon, taught painting with an emphasis on spatial structuralism and used a system of leading the eye into the painting with diagonal lines.  According to Beal,

Using the lessons of Isobel MacKinnon, I began diagonals as lines of entry and exit, as well as using the empty chairs and other foreground objects as “welcome mats” and linear fractures and convolutions as a means of drawing the viewers into the image and pressing the subjects out into the world.*

The contemporary reception of these works reflected the mindset of viewers and critics at the time, and many considered the paintings too mechanical and graphic. As the artist and critic Sidney Tillim wrote in 1969  “[Beal] combines two and three dimensional design in the same pictures and constructs set-ups that are obviously “machines” which provide the endless flow of varied shape, pattern and color.”**

Eventually, the artist grew disappointed with this body of work, believing these paintings lacked humanism.  The “machine” label was not seen as praise, and Beal ultimately determined that this avenue of pursuit was wasted time and returned to his former, more expressive, style of painting.  According to Beal it all came to a head on one evening:

Alfred Leslie and Sidney Tillim almost mugged me, pushing me into a doorway on the upper Madison Avenue and berating me for betraying Realism and betraying myself, for moving away from “the true path.”  It was one of the finest things that anyone ever did for me, for not only was their advice very pertinent, but it showed that they really cared for me - Realist painters rarely even talk to one another - and I was deeply touched.* 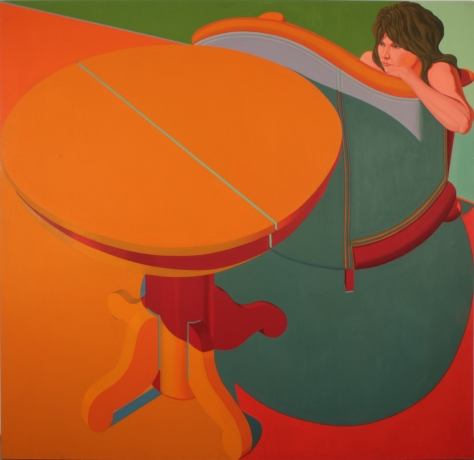 Jack Beal only painted in the flat, bright, Hard Edge style seen on view in George Adams Gallery’s current show for four years. Between 1968 and 1972 the New York Realist painter—known for his nude studies and the public murals he produced for the U.S. Department of Labor building—departed from his thick-brushed signature strokes to paint in blinding neon, flat foregrounds, and sharp geometric compositions.