The George Adams Gallery is pleased to announce an exhibition of new paintings by Andrew Lenaghan, his fourteenth solo presentation with the gallery since 1995. Titled Places Have Their Moments, the exhibition features eleven new paintings on panel along with a selection from Lenaghan’s recent sketchbook and will be accompanied by a full-color catalog featuring an interview with the artist.

Since his last exhibition at the gallery, Lenaghan has taken a step back to reconsider how - and what - he paints. The result is a considered, honest and deliberately tempered series of images, faithful to his ongoing fascination with the city, but made at a slower pace. No longer working solely “in situ,” Lenaghan's recent paintings are constructed from sketches, photographs and extended observation. His work has always been a record of a changing city, particularly in Brooklyn where the empty lots and abandoned warehouses that were so frequently his subjects have been replaced by new construction and green spaces. These new paintings reflect that change: formerly desolate spaces are activated by pedestrians and traffic lending a powerful and dynamic vitality to the work. While a human presence is not exactly new to Lenaghan’s work, the figures and traffic speeding through his cityscapes are. One of the more impressive panels is a summertime view of the beach on Coney Island, densely populated by sunbathers against a backdrop of the amusement park. While Lenaghan has painted this beach before, it was usually empty, often off-season. As an example of his new approach, Coney Island in July was developed from a number of quick studies on site (included in the sketchbooks on view) and numerous photographs he took of beachgoers this summer. Working in the studio rather than on the street has allowed him to more carefully compose each painting, to take ownership of the views he paints. In the interview for the exhibition catalog, he points out, “the different places all have some sort of meaning to me in my daily life and personal history… The only way to paint those paintings was from photographs because they were views that you couldn’t stand in and that was something I wanted to open up.”

Lenaghan does continue to work from life, but in his sketchbooks, as quickly painted, often loose and gestural scenes. The examples in the exhibition are from the past few years and in that time they have grown in both complexity and detail, expanding to cover entire spreads. For this reason, the books are shown in their original form, to allow visitors to look through the pages. His subject matter here is generally autobiographical and reflects how these sketchbooks are part of his everyday routine. Some views are revisited often, such as his backyard and Brooklyn neighborhood, as well as the views in many of the larger paintings at varying times of day and year. Another, less visible, shift in Lenaghan’s work stems from his increasing use of social media and digital editing. Instagram in particular has evolved into a platform for him to share not only his paintings, but also his role as a teacher, a father and self-designated combatant of fake news. Certainly the sketchbooks show this best, as they are diaristic in the same way as his posts are, though in some cases this content has found its way into his larger panels. Looking closely, one can find billboards and awnings repurposed for some politically-minded, succinctly worded phrases. 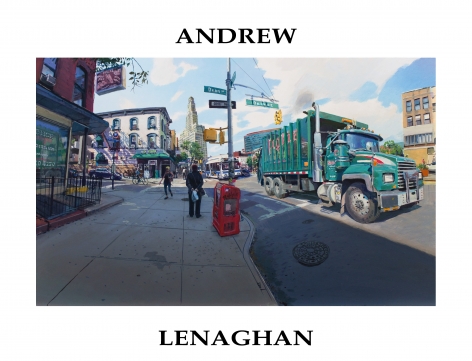